The Arturia DrumBrute Impact Analogue Drum Machine takes the elegant control interface of its predecessor and combines some aggressive edginess for good measure. The result is a DrumBrute that bites back! Whatever style of music you produce, the DrumBrute Impact delivers a thumping energy and takes no prisoners.

At the heart of the Arturia DrumBrute Impact there are 10 powerful analogue sounds to play with that includes a thumping kick, a pair of crisp snares, bouncing toms, a selection of shimmering cymbals, searing hats, a beefy FM synth and there's even a confident cowbell. The highly tactile control layout offers up a pad for each instrument, along with an array of knobs with which to tweak and manipulate each sound to exceed your creative expectations. The DrumBrute Impact boasts independent output distortion with accompanying bypass switch, which allows you to push your beats into gnarly territory.

The Arturia DrumBrute Impact inherits enviable step-sequencing potential, which allows you to create anything from simple beats to achingly complex polyrhythms that will turn your tunes inside out. The step-sequencer can hold up to 64 patterns with up to 64 steps each - the only thing limiting you here is your own imagination.

Whether you choose to record real-time performances or layer up a slow and steady performance, either way it can be done with ease. The built-in touch strip allows you to punch in some dynamic flourishes from single instrument attenuation to whole patterns, or even throw in some syncopation and groove using the 'Swing' function.

The Arturia DrumBrute Impact is as hands-on as it gets, taking you away from the mouse and keyboard so there is nothing between you and your beats. Boasting a wide selection of sync and connectivity options, you can integrate the DrumBrute Impact into any setup, and it plays well with virtually any synth, sequencer, or MIDI-enabled instrument. You can mix in real-time with multi-track capabilities, record mixes, tweak effects, and mix sounds across multiple bus outputs with independent drum outputs at your disposal. You can layer and build up highly complex performances with ease and never have to look at a single screen.

The Arturia DrumBrute Impact is compact and lightweight with a brightly lit interface that makes it ideal for travelling artists performing on darkened stages. There are multiple sync options available that includes internal/MIDI/Clock for seamless syncing with other hardware in your setup. 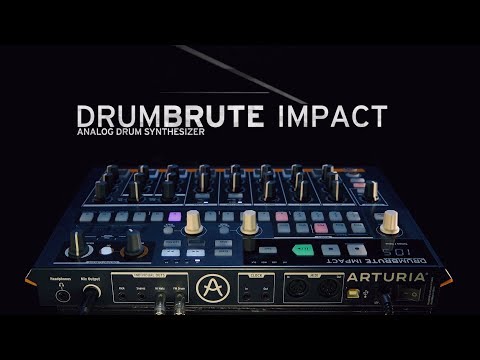