The Blackstar 10th Anniversary Series One 10 AE Guitar Amplifier Combo is a celebration of the British amp manufacturer's first decade. As part of a trio of models on offer (also available are the Artisan 10 AE and the Artist 10 AE), the Series One 10 AE is a beautiful all-valve powerhouse with Blackstar's patented ISF control feature that adds exceptional distortion flexibility, and is perfect for home, and studio use.

The Series One 10 AE is a high-gain monster that punches well above its weight. For such a small amp, you'll be amazed at what it can do. Inspired by the legendary S1-200, the Series One 10 AE is equipped with a KT-88 power amp, which is perfect for creating dynamic modern clean tones, and tight high-gain, high-intensity overdrive. The inclusion of Blackstar's patented ISF control takes your tone's character from a distinctly "British" vibe that is reminiscent of vintage valve amps through to modern high-gain "American" amp tones. Whether you're looking to pay tribute to your old school hard rock heroes or lay down some ground-breaking riffage, the Series One 10 AE is as adaptable as you are.

A specially voiced built-in reverb effect gives you the breadth and depth needed for that all-important sense of space in your tone. Whether you want to keep it subtle or go for a drenched wall of sound, you have it ready and waiting to be explored.

Blackstar have equipped the Series One 10 AE with a speaker emulated output, which is perfect for tracking and recording directly into your DAW of choice, without having to faff around. The series effects loop enables outboard effects to be inserted directly into the pre-amp stage, giving you greater creative and tonal control. The amp is supplied with a single-button footswitch that turns the Boost function on/off, whilst an optional double-button footswitch also enables the built-in reverb effect to be switched on/off.

If you fancy taking your sound to the stage or incorporating an external speaker cabinet, there are three speaker outputs to choose from, including: 1 x 16 Ohm, 1 x 8 Ohm, and 2 x 16 Ohm.

The Blackstar Series One 10 AE boasts an impressive output thanks to an awesome Celestion Seventy 80 speaker. The extended frequency range of the Seventy 80 makes it fantastic for satisfying the demands of today's players. With a detailed and crisp definition, the low-end remains tight with a punchy, aggressive upper mid-range. The high-end shines with a sparkling brilliance, so no matter what you're playing, you can rest assured that your tone is in good hands.

The Blackstar 10th Anniversary Series One 10 AE Guitar Amplifier Combo is a very special model. However, it is limited to only 1,000 units, so don't miss out on your chance to grab yours. 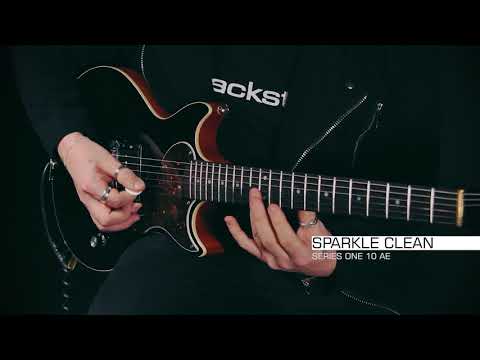