The Blackstar HT-1R MKII Guitar Amplifier Head is a 1 Watt, all-valve beast from Blackstar. Don't let the diminutive wattage fool you, this head packs some serious punch. Featuring two channels with four voices you'll find enough variety of tone to suit any style coupled with the build quality you'd expect from one of the world's leading manufacturers.

With an ECC82 valve in the power amp stage and an ECC83 (12AX7) in the preamp, the HT-1RH MKII gives you a tight sound with a chime-like quality. Using the push-pull valve power amp design you get the response of a much larger amplifier in a smaller package and the HT-1RH MKII has plenty of gritty tones, responding well to distortion.

With four different voice options, the HT-1RH MKII is ideal for any style or situation giving you great versatility and killer tones. The voices are footswitchable so you can change it up at the click of a button.

The clean channel has two voices, the first is an 'American' style sound with more emphasis on the low-mids and a warmer character. Voice 2 is designed to emulate the Class A 'British' amplifier sound, a strong midrange and overall more aggressive sound.

The Overdrive channel consists of a 'Classic' tone which is the well-known Blackstar 'British' overdrive. It cleans up remarkably well and can go all the way to all-out crunch if you need it. The second is a 'High Gain' channel which has extra growl in the high end and a tight low end inspired by the Blackstar HT Venue MKII high gain sounds.

The HT-1RH MKII features Blackstar's patented Infinite Shape Feature, an addition designed to give you access to a much wider tonal palette than a traditional amplifier circuit. Set to '0' you get an 'American' style tone with a tighter focal point. Give it a twist to '10' and you get a more 'British' tone that's full of warmth and crunch.

A traditional amplifier has a specific range that it operates within which is what gives you the signature sound of the classic brands. Blackstar have created something wholly different with the ISF knob, so instead of being limited to a specific range built in by the manufacturer, you have access to the full tonal spectrum, resulting in an extremely versatile amplifier that will cater for any occasion and allow you to create your own signature sound.

With the Blackstar HT-1RH MKII, you get the option to connect to any cab that operates between 4 and 16 OHMS plus a USB Audio out and emulated output for recording in the studio. The front fascia also features a line in so you're covered for any scenario you come across. 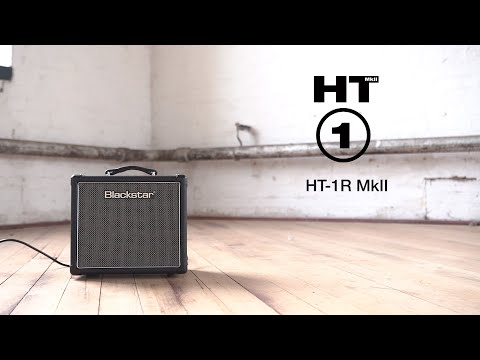