The Casio Celviano AP-470 Digital Piano builds on the already accomplished AP-270 and adds an incredible 40-watt speaker system, enhanced string resonance simulation and a liftable lid for that touch of class. Make no mistake, despite the price, this is a seriously prestigious digital piano and comes backed up with a 3-year warranty.

The AP-470 contains two beautiful new stereo grand piano tones that have been painstakingly sampled and brought to life with damper resonance, simulating the entire body of the instrument, not just the strings. In addition to articulate pianos, the Casio AP-470 features a variety of 19 instruments, with the ability to layer and split for dynamic performances. With a generous 256 notes of polyphony, even the most detailed of performances will be voiced without compromise.

To complement the sound engine the AP-470 boasts acclaimed Tri-Sensor II Scaled Hammer Action piano keys topped off with a simulated ebony and ivory material for a smooth touch. Progressive hammer action means that just like a grand, the keyboard will 'play' heavier the further down the tonal range you go and lighter toward the top. Adjustable touch sensitivity allows customisation to suit any playing style, and adjustable hammer response accurately reproduces the delay between when the key is pressed, and a note is sounded.

For the times when silent practice may be needed, the AP-470 can shut-off the internal speaker system when headphones are plugged in. Because the AP-470 also supports up to 2 headsets at any time, student and teacher can work together without disturbing others. Duet Mode splits the piano into two equal pitch ranges, allowing a student and teacher to work with the same range of notes.

The AP-470 has a built-in 60 song library and two-track sequencer functionality but it is also capable of connecting to your computer or smart device via the built-in USB connection. This makes it ideal for song-writing with the audio software of your choice.

The AP-470 has the ability to work alongside the free Android and iOS app Chordana. Chordana Play connects to the AP-470 and teaches you to play in a fun and visual way. Follow the music score or piano roll notation at your own pace, with the app guiding you through each step.

Sophisticated through and through the Casio Celviano AP-470 Digital Piano oozes with power and performance features that everyone from beginners to seasoned professionals will appreciate. Elegant enough to be in your home but also ideal for venues the AP-470 is an impressive delight. 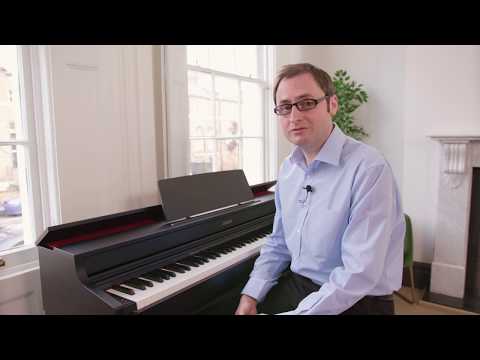