The Electro Harmonix Nano Small Stone Guitar Effects Pedal is an analogue phase-shifter pedal that gives you the thick sweeping, swirling tones that are perfect for any musical style. Whether you're looking for a fat a saturated bluesy phase, some grit with your chicken pickin', and want to create a distorted vortex in your hard rock and metal tones, the Small Stone is as adaptable as it is tiny.

The control layout of the Nano Small Stone couldn't be simpler to use, with a Rate pot that controls the speed of the phasing sweep from subtle to speedy, a Colour switch that changes the character of the phase response, and a bypass footswitch.

The Colour switch offers a milder phasing when in the lower switched position, with increased speed that creates a twangy sparkle, which is great for country players. When in the up position, the phase digs a little deeper to create an enveloping, wah-like 'wow' response. Adjusting the rate knob creates a tone that drags you to the depths.

The beauty of the Small Stone lies in its analogue heart, which creates a tender warmth that has aided its appeal amongst guitarists for decades. It doesn't overwhelm your tone, but instead teases and nurtures it to bring out the best, whilst enhancing it along the way.

As we've come to expect from the team at Electro Harmonix, the Nano Small Stone Guitar Effects Pedal is built to last. The tank-like chassis is made using lightweight aluminium that gives it a durability and resilience that is a must for touring artists and studio players alike. Every pedal is supplied with a 9V power supply, so you're good to go as soon as it arrives. The pedalboard-friendly design allows this little beauty to slip into the most crowded of pedalboard's discreetly, enabling you to maximise your tonal arsenal in both the studio and on the stage.

Each pedal is supplied with a 9V battery to get you started immediately, but the Nano Small Stone is also equipped with a 9V jack input for connecting to your existing power supply. 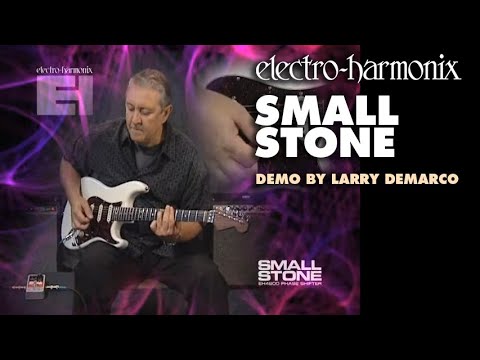