The Electro Harmonix Soul POG Guitar Multi Effects Pedal combines two exceptional pedals - the Soul Food overdrive and Nano POG polyphone octave generator -, each with their own unique tone-shaping abilities, into one brilliant little unit. Whether you're experimenting at home, recording in the studio, or hitting the stage, the Soul POG opens up a world of tonal exploration before you. Use either effect individually, both simultaneously, or insert other pedals between them using the internal FX Loop to achieve your tone-bending dreams.

The Electro Harmonix Soul Food overdrive drew inspiration from one the most revered of all vintage distortion pedals: the Klon Centaur - a very rare unit exchanges hands for insane amounts of money, so the idea was to produce a new alternative at a more affordable price. When designing the Soul Food, the engineers at EHX aimed to create a pedal with transparent tone, that didn't colour the guitar's tonal character in any way, but was still more than capable of lifting itself out of a mix with clarity.

The Soul Food is capable of producing a broad range of overdrive tones, with a subtle gritty boost that can be added to tones, as well as heavily saturated sounds, and everything between. The treble control provides the means to add a bright edge, but with a smooth character that is at odds with none of the harsh tone introduced by treble on many pedal designs.

The Nano POG by Electro Harmonix is a polyphonic octave generator with a simplistic layout of straightforward controls that enable you to create incredibly cool tones. The internal circuitry tracks your playing style accurately, regardless of your preferred technique, and even when you accidentally strike a neighbouring string it won’t tarnish your sound in any way. Dial in your chosen settings using the Sub Octave or Octave Up pots, mix in with the Dry control and you can emulate a range of authentic sounds, from organ-like tones to what sounds comparable to a 12-string guitar. When using two separate amplifiers, the Dry and Effects output jacks allow you to merely transmit your sound just through one of the amps if you wish.

As noted above, each effect can be used independently, with their own control knobs. The Soul Food controls are: Drive; Treble; Volume; and Footswitch with LED. The Drive control attenuates the amount of input gain, and as it is turned clockwise, the overdrive is taken from clean boost to classic distortion. The Treble knob acts as a tone control, allowing you to dictate whether or not greater emphasis is afforded to a higher or lower tonal frequency range. The Volume knob sets the output level of the Soul Food.

The Nano POG controls are: Sub Octave; Octave Up; Mode switch; and footswitch with corresponding LED. The Sub Octave signal is one octave below the original input signal (or half the frequency), so by rotating the knob, the Sub Octaves signal is increased. The Octave Up knob control the output volume of the signal that is one octave above the original input signal (or twice the frequency). The Mode switch changes the way in which the Up Octave responds to your playing style, with single-note runs and chords catered to with individual modes.

As this is a multi-effects unit, there is an effects order switch that allows you to dictate whether or not the Soul Food is the lead effect, of the Nano POG.

There is a single input jack for the Soul POG. However, there is: an Effect Out audio output; a Send jack that can be used to insert effects between the Soul Food and Nano POG, as well as splitting your signal into a separate effects chain or amplifier; a Return jack that is used in conjunction with the Send Jack as an FX Loop; and a Dry Out jack that send a buffered version of the input signal.

Thanks to its true-bypass design, you can rest assured that when the signal is not in operation, your signal will remain unblemished.

The Electro Harmonix Soul POG Guitar Multi Effects Pedal offers a harmonious overdrive/polyphonic octave generator partnership in a single-unit, that plays well with others and guarantees that your tone will never sound the same again. The robust metal chassis is road-ready and built to last, whilst the diminuitive design allows it to slip snugly into any pedalboard setup. 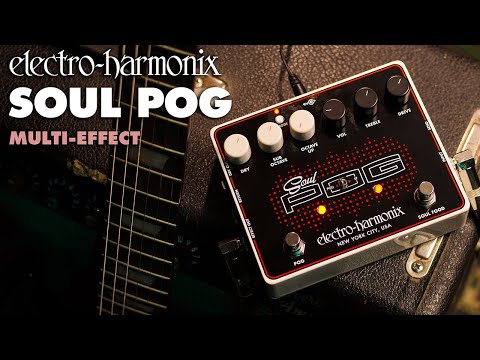