The IK Multimedia UNO True Analog Synth Module is here to prove that you can generate monstrous sound from the smallest of units. Comprising of all-analog circuitry, built-in filters, effects, a step sequencer, keyboard, 100 preset voices and more. This is one tiny synth that is here to put a firm stamp on your music production.

Try as they might, digital synths cannot replicate analog tone. The UNO Synth employs analog circuitry from start to finish so that whether you want subtle, resonant tones to absolute audio meltdown - you got it. The audio engine of the UNO utilises 2 VCOs, a noise generator, resonant multimode VCF and VCA as well as 2 independent VCOs with Saw, Triangle, Pulse waveforms.

But the initial sound creation is merely the tip of the iceberg. UNO packs in a 2-pole OTA-based analog resonant sweepable multimode filter with LPF, HPF and BPF. If overdrive is your thing (and it should be), the engineers at IK Multimedia have also given the UNO the gift of its own custom-designed, dual-stage overdrive that's capable of adding everything from gentle warmth to immense saturation.

If you're new to synths and if you're not the greatest musician out there you'll still get instantly impressive results from the UNO. 100 built-in presets are there to get you started on your musical journey - 80 of which can be overwritten with your bespoke creations. To help you do this, the UNO has simple programming that is only limited by your imagination.

A 16-step sequencer is on hand to create unique phrases utilising your own notes or by using the built-in scales so that you can hit the ground running as soon as you get the UNO out of its box. Further to this is the addition of a comprehensive effects section including delay, wah, tremolo, scoop and more to ensure your soundscapes can grow as rich as possible.

The UNO can step into any workflow. Standalone or connected to a Mac, PC or iOS device you have the power of unlimited analog productivity. Free software is also available for deeper editing and patch storage. Finally, the UNO's ability to run on USB or battery power truly takes the limits off when and where you can begin making thumping tunes.

Sometimes bigger is not better, sometimes you have to put your money on the little guy in the fight. The IK Multimedia UNO True Analog Synth Module may look like an underdog but make no mistake - this really is a beast of a synth. 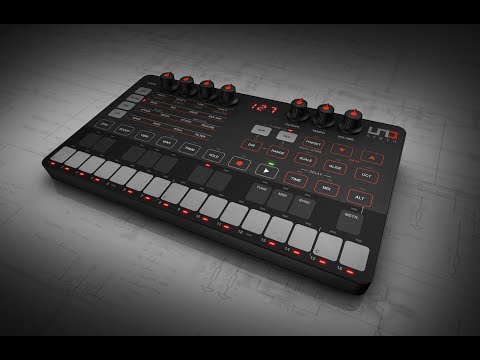