Combining the epic sound of a grand piano with a keyboard that is just as responsive in a compact unit you can take anywhere is quite a challenge, but it's a challenge that Kawai have taken on and proved to be very successful. The result is the Kawai ES8 digital piano; perfect for home, studio or stage, this powerful unit pushes boundaries when it comes to quality stage pianos.

Building on the success of the RHII hammer action keyboard, this new and improved version combines 3-sensor technology with graded weighting to give you the most accurate and responsive touch, no matter what your playing style. The ES8 mimics the different weights of hammers from bass to treble and also uses ‘let-off’ to recreate that subtle ‘notch’ sensation when playing incredibly softly. Finally, Ivory touch has been added for a truly authentic feel meaning that if you were to shut your eyes, you would feel as if you were playing a world-class grand piano.

The Kawai ES8 crams in a plethora of incredibly impressive voices. Capturing the beautiful Kawai SK-EX, SK-5 and EX grand pianos, you are spoilt for choice when it comes to expressive performance ability. Also included are upright pianos, electric pianos and other sounds such as strings, organs, bass and choirs which can be split or layered across the keyboard to create some truly wondrous performances.

Band in a box

The Kawai ES8 has a huge variety of backing styles ranging from pop and rock, jazz, latin, funk, dance and more! This will allow all performers to breathe new depths into their repertoire. You can also drop in one-finger ad-lib solos into your music making the ES8 a powerful performer for solo pianists and singers. For times when you want some backing music whilst away from the ES8, you can set it playing any of the built in 27 demo songs.

All of your performances can be captured via the built in 90’000 capacity sequencer which also supports A-B playback so you can critique and practice certain passages. Fr more complex recordings, the Kawai ES8 is capable of reading and writing MP3 and WAV data to USB. USB support is also provided for saving voice and registry settings for instant recall on stage.

Connect to any computer

The Kawai ES8 features USB data connectivity as well as storage, so you can use it live with any computer or Laptop running your favourite performance or sequencing software making the ES8 a dream in the studio as well as on stage. 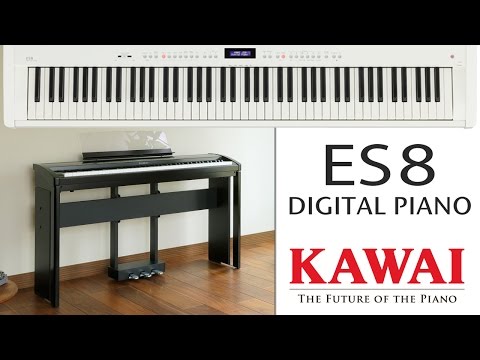