It's time to welcome a new addition to the family, with the release of the powerful Korg Volca Sample digital sample sequencer, an intuitive and ultra-powerful volca sequencer that provides endless enjoyment.

As with other Volcas, the Sample has been designed with ease of use and live performance at its core. Quickly inserting and editing notes using the 16 step keys can be done alongside maintaining visual confirmation of the timing of the notes per measure. Not only that but you can record each performance in real-time, with up to ten user-created sequence patterns being stored in internal memory.

Motion sequencer with up to 11 parameters

At your disposal is a motion sequencer that can record you knob movements, whilst allowing you to add time-varying change to the signal output. If you're an artist who likes to take improvise without boundaries, the motion sequencer gives you plenty of freedom to get truly creative, with adjustment of such parameters as: playback length; frequency; pitch attack and decay times; amp attack and decay; and pan, within easy reach, you can sculpt and shape you sounds with incredible complexity.

Adding dynamics to your performances

The active step function allows steps to be skipped during sequences, and the step jump function instantly plays the step that you're pressing. Whether you're a natural knob-twiddler or a glitch kid, adding some irregular rhythm patterns and short-loops is easy. Using the swing function, you can inject a bit of groove into beats with incredible complexity, including dragging the beat for a laid back vibe, or maintaining a tight up-tempo sound.

If you're looking to create some cool breaks by boosting or cutting low/high frequencies, then the built-in analogue isolation circuit offers exceptional possibilities. The reverb effect can be switched on/off for each part, and even used in conjunction with the isolator, breathing depth and life into every performance. The song mode allows you to save up to six song patterns, with each one capable of combining up to 16 sequences.

Get connected for even greater power

By using the sync jack, you can synchronize the Sample playback with other volcas or electribe units. Not only that, but you can use the "SyncKontrol" iPhone app to control the tap tempo, alongside the WIST functionality of an iOS music app, e.g. Korg Gadget, for wirelessly synchronizes playback in the club or in the studio. Thanks to the MIDI IN jack, you can use the Korg Sample as a MIDI controller and a sound module, sending MIDI note messages from your DAW of choice.

In addition to 100 preloaded samples, a dedicated and free iOS app - information to be released in October - will enable user to load original samples. Therefore, audio files on your iPhone or iPad, or ambient sound recorded directly through the app can be used as samples.

Thanks to its portable design, battery operation, and built-in speaker, the Korg Volca Sample can travel with you around the world, ready to rock the stage at the drop of a hat. 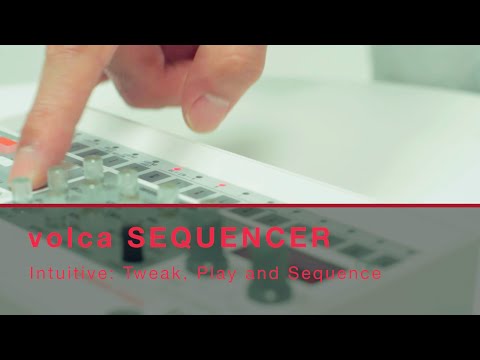