The Modal Argon8 Polyphonic Synthesizer is the latest offering from Modal Electronics, an innovative and forward-thinking company bringing a revolution to the world of synthesizers. With a brand new wavetable synthesizer engine and an incredibly price-conscious and compact package, the Modal Argon8 is sure to find fans in the world of electronic music.

The Modal Argon8 features true eight-voice polyphone with 120 carefully crafted wavetables split into 24 banks of 5 morphable waveform sets. Everything from analogue classics to the cutting edge of EDM is featured here, with many coming from the original and legendary Modal 002 as well as a huge range of mathematically generated tables. Additional PWM bank and four noise/modulation banks are also accessible on Oscillator 2. Twenty-eight static wavetable processors are present including de-rez, wave folders, wave-shapers, phase shapers and rectify, all of which can be applied to the 120 wavetables to give a frankly insane amount of modifications and new waveshapes. It doesn't end there though, thirty-two high-resolution wavetable oscillators feature, four per voice with eight types of oscillator including Phase Mod (FM), Ring Mod, Amp Mod, Hard Sync and Windowed sync. With this amount of features at this price point, you're getting an incredible amount of bang for your buck.

There are three dedicated envelope generators for AMP, MOD and FILTER that can be accessed independently or all three simultaneously including negative (reverse) versions, two pole-morphing resonant filters and waveshaping distortion. The sonic possibilities with the Modal8 are practically limitless and that's before you've even gotten to the effects. The powerful, independent and user-configurable stereo FX engines let you create distinct delays, resounding reverbs, flying flangers, profound phasers and complex choruses, adding depth and breadth to your synth sounds. The ridiculously powerful 'Mod Matrix' has eight assignable slots and four additional fixed routes with eleven mod sources and fifty-two destinations.

The built-in programmable arpeggiator is sophisticated, comprising of thirty-two steps with rest capability and up to two thousand and forty-eight steps before repetition. A real-time sequencer with five hundred and twelve steps, input quantize and four recordable/editable animations means the Modal8 has all your programming needs covered. The polyphonic LFO can sync to frequency divisions and there are two audio rate LFOs with tempo sync as well, one poly and one global. Glide and Portamento control with both legato and staccato modes add further control to your sonic sculpting. There's also a free dedicated app included that gives you option to use the Modal8 as VST3 and AU, compatible on PC, Mac, iOS and Android, adding a further level of functionality to this brilliant piece of equipment.

With 37 keys and a FATAR TP9/S full-size keybed you get both velocity and aftertouch to make for a fantastic playing experience once you've settled on your sound and from the 1.54-inch large OLED display you get instant visual feedback whether paying or editing. Multiple keyboard modes including Mono, Poly, Unison 2, 4 and 8 as well as Stack 2 and Stack 4 give you plenty of options for customising, making the Modal8 adaptable to many a genre and playstyle. A four-axis joystick can be assigned to a massive range of modulation destinations as well as being virtually locked when necessary, giving you the option to control effects and parameters on the fly. Connectivity comes in the form of ful size MIDI 5-pin sockets, full size quarter-inch jacks for both audio and external controls such as sustain and expression as well as a 3.5mm stereo input with the ability to route incoming audio through the FX means you're well equipped for any situation, be it on stage or in the studio.

The Modal Argon8 Polyphonic Synthesizer packs an insane amount of features into a compact and sturdy unit at an unprecedented price point. A young company based in Bristol, the scale of their dedication to creating a quality product is staggering. With so many options for styling your sounds the depth of this synth will keep you coming back for more and more, whether you're wanting a new addition to the studio or something to take on the road with you. Its compact size means it will fit a variety of functions and solid build ensures it will put up with life on the road. 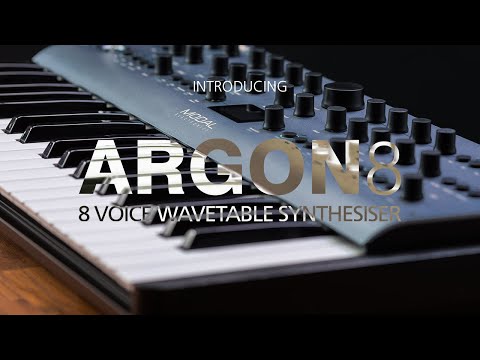