Novation was originally formed in 1992 by Ian Jannaway and Mark Thompson, both having a passion for electronic musical instruments. In 2004 Focusrite, primarily serving pro & high-end recording studios, acquired Novation. Focusrite looking to expand both their home recording and hobbyist reach looked to develop products not only for pro studios but for home recording and to gain an avenue into the ever-expanding electronic dance market. Novation have decades of experience making analogue and digital synthesisers, midi controllers, grid controllers and audio interfaces. Novation Summit is the company’s flagship successor to Novation Peak and embodies Novation’s drive to create a product that is laden with features beyond the retail price of the unit. There is a clear passion to provide the user with the best experience possible and to ensure that there are little by way of limitations to the systems musical potential.

Summit is twice the Peak and more

Novation Summit has 3 New Oxford oscillators proffer subtractive, FM and wavetable synthesis which can be fed into genuine analogue dual filters, distortion and VCA. Summit's oscillators are twice as powerful as Peaks with 16 voice and split keyboard functionality. Novation’s multitimbral engine allows merging and combining of two complete and independent patches. The Summit has dual filters with 6 low pass, band pass and high pass controls as well as LFO, Frequency modulation and a plethora of other effects.

One of the Novation Summit's most obvious differences to its predecessor Peak is the addition of a five octave keyboard. The keyboard is not only weighted for accurate and comfortable playing but is velocity sensitive and has aftertouch. Also, any of your patches saved in Peak can be used in Summit.

The Novation Summit keyboard can be split and layered to create almost limitless harmonic depth. Allied with the 16 voices which can be split, stacked and divided for expanse sound sculpting, the Summit is one of if not the most advanced and featured packed synthesisers on the market. You can split the keyboard at the note of your choice allowing you to create any split sub division of the five octave keyboard. This unprecedented control extends further into the very heart of the unit with manually adjustable and programmable controls.

A mountain of effects and filters

Packed with modulation sources for deep sound design such as LFOs, envelopes, Animate buttons and more. Extended controls and adjustable drift and divergence emulate the inherent and often desirable instability of analogue circuits. FM parameters, envelope loop switches and LFOs 3/4 moved from Peak’s menu system to the front panel, for easy programming and tweaking. The true stereo analogue signal path comprises dual analogue multimode filters, analogue VCAs and three stages of analogue distortion – pre- and post-filter, and post-VCA. With roots in the legendary OSCar, via Bass Station II, Summit’s analogue credentials are truly impressive. Summit has Midi thru, out and in, CV mod in for external voltage control units, audio in and auxiliary out allowing external units to use the onboard effects of Chorus and Delay while simultaneously still being able to use the Summit's keyboard.

Novation has raised the bar again and managed to create something truly spectacular. Packed with more features and more depth than the previous flagship synth, Peak, they have delivered something that will define the sound of the next generation of music producers, EDM musicians and lovers of electronically generated music. With a synthesiser this packed with options, effects and potential it can be difficult to highlight its standout features as there are so many. This is how a company should be, 100% dedicated to its craft, looking to fill every nook with an option. Too much is never too much, Summit allows you to create stunning basses, leads, arps, pads, effects and beyond what can be measured in words. Summit is a spectacular electronic achievement and would elevate the quality of any pro or home studio, titillate the imagination of any pro or amateur musician and be a solid investment for the future. Scale the Summit to see your future musical horizon. 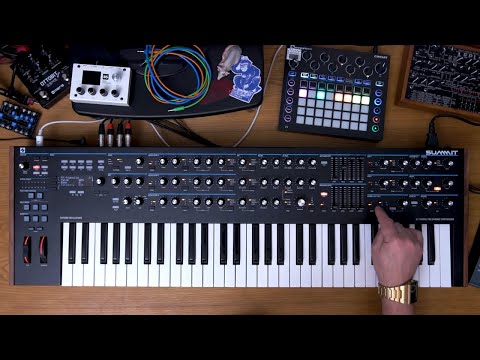