Having built a reputation based around the manufacture of valve amps, Orange have taken an unexpected turn by delving into the world of high-power, solid state amplifiers. Orange has spent the last few years perfecting their solid-state amps, making them deserving of the brand, and accumulating in a line up of two combos and a head. The larger of the two combos, the Orange Crush Pro CR120C Guitar Amplifier offers power and simplicity, with 120-watts through a pair of 12” speakers, and an easy to use, two-channel design.

Based on the Rockerverb series, the switchable, two-channel design of the analogue, solid-state Orange Crush Pro CR120C supplies you with clean and dirty channels.

With its two-band EQ (bass, treble), the Orange CR120C’s clean channel gives a warm sound, which, similar to the Rockerverb series, breaks up nicely when cranked. With a gain control and three-band EQ (bass, middle, treble) the dirty channel gives enough scope for a wide range of over-driven and distorted sounds. A selection of three reverbs (spring, hall & plate) is also built-in.

Despite this being a new venture for the amp manufacturing, the Orange Crush Pro CR120C Guitar Amplifier definitely belongs, with all the aesthetics Orange are known for being in place. The Orange basket-weave Tolex, woven speaker grille, beading, Orange signature picture frame edging, and hieroglyph control symbols are all in attendance, along with the famous orange chassis. 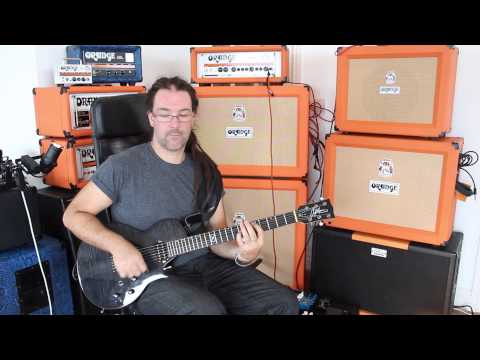