The Pioneer CDJ-2000 NXS2 Professional Multi Media Player is the third generation of the industry-standard player, and brings with it a tonne of features that give you even greater control over your live performances. The same familiar design and control layout is on-hand to give you the freedom to manipulate settings in a fluid and free-flowing manner, with carefully executed enhancements to streamline the creative process.

The CDJ-2000 NXS2 is designed to be at home in any club environment, and is equipped with the ability to transmit audio to the highest possible standard. The internal soundcard boasts an impressive 24-bit/96kHz transmission rate, with improved digital signal processing (DSP) and Digital Out (Coaxial). Analogue noise performance is significantly reduced by a high-performance 32-bit D/A converter and separate analogue power supply. To match the superior audio transmission quality, a range of file types are supported including FLAC, Apple Lossless Audio (ALAC), as well as MP3, WAV, AAC, and AIFF.

The Pioneer CDJ-2000 NXS2 is equipped with a large 7-inch colour LCD touchscreen display, giving you tactile control over waveforms with Wave Zoom, Needle Countdown, Phase Meter, and much much more. There is access to a full QWERTY keyboard, which allows you to enter Keyword Search and Track Filter to browse and select tracks faster for a seamless performance.

As we've come to expect from the CDJ-2000, the control layout is intuitive enough for those who are unfamiliar with the deck to get to grips with everything in next to no time at all. There are now two banks of four Hot Cues, which allow you to set up 8 cue points in rekordbox, with customisable colours so you can stay on top of your mixes. User definable Quantization allows cues and loops to be snapped to the rekordbox beat grid for consistently flawless performances every time.

The included DJ software, rekordbox, isn’t just a music library but a tool for preparing music in advance, with new features for the CDJ-2000 NXS2 including Wave Zoom, Key, Active Loop and Hot Cue Auto Load. Used on a smartphone you can make preparations such as: Playlist Creation; Cue/Loop Point settings; Beat Location settings; and Waveform Analysis on the move. You can even transmit your configurations to and from devices, giving you absolute freedom when it comes to creating indepth performances. The relationship between hardware and software is a harmonious marriage that opens up a universe of music-creation potential.

Pro DJ Link connectivity allows up to four media players, turntables, or laptops to be operated simultaneously via a LAN connection. Used alongside rekordbox software, and you have an unstoppable setup with total control at your fingertips.

The Pioneer CDJ-2000 NXS2 Professional Multi Media Player is the industry standard media player for a reason, find out why for yourself and order yours now. 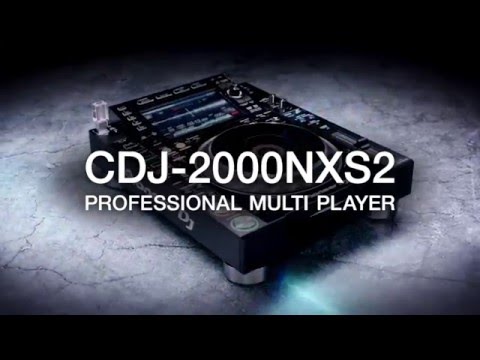