The PRS SE Paul's Guitar in Fire Red is about putting the latest developments of the guitar into one package of incredible tone, consistent functionality and ultimate playability. Based on one of Paul Reed Smith's own custom models, Paul's Guitar gives you the best of both worlds with some neat pickup switching option as well as the superior build quality and striking finish you'd expect of any PRS guitar.

PRS are known as a top luthier of guitars for good reason, each one of their models crams in quality craftsmanship and top of the range parts to ensure a fantastic product that gives you plenty of bang for your buck. The PRS SE Paul's Guitar is no different, designed in conjunction with Paul himself you get a Carved Figured Maple top on a Mahogany body to give you a warm and mellow tone with acres of sustain. Top quality mahogany sounds better as it ages, so you'll find this guitar just gets better and better the more you play.

Combined with a Wide Fat profile Mahogany neck is a Rosewood fretboard that lends this guitar rich warmth of tone. With 22 frets marked by the distinctive PRS bird abalone inlays and a comfortable 25-inch scale length, you'll find riffs and licks come with consummate ease when playing the PRS SE Paul's Guitar.

To give you some inclination into the amount of work that went into this guitar, PRS spent over 9 months just configuring the pickups. The goal was to get the truest possible single coil sound alongside the traditional humbucker sound PRS are known for. Using the two extra toggle switches on the lower bout of the PRS SE Paul's Guitar you can choose whether you want single coil neck or bridge individually or both together. Some clever wiring and magnet winding gives you the twang of single-coil guitar alongside the beef of a humbucker making for a huge variety of sounds in one instrument.

The PRS SE Paul's Guitar is unique amongst the SE range in that it features a Stoptail style bridge piece. The Stoptail bridge has brass studs as well as brass inserts on the saddle to increase sustain and definition. Combined with the Vintage-Style tuners with black buttons you can always be assured of tuning integrity with this guitar, whether you're soloing the blues, downpicking metal riffs or fingerpicking arpeggios.

The PRS SE Paul's Guitar in Fire Red is a simply stunning piece of equipment, cramming a tonne of premium features at a very reasonable price point. This is a guitar well suited to a variety of genre's and playstyles and with that world-renowned PRS build quality could feasibly last you the rest of your life. 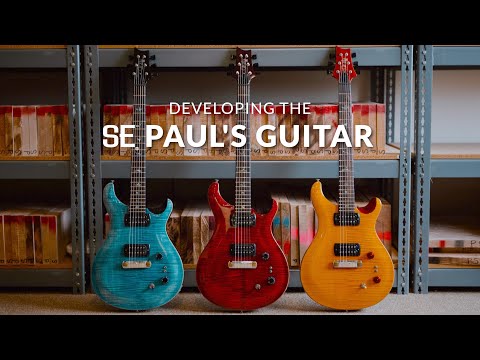