Inspiration is a funny thing. It never seems to strike when you’re sitting in your studio with all your recording equipment laid out, armed and ready, but more than likely it will be during your daily commute or when you’re at the in-laws for dinner, with your mind concentrating on anything but the angry gentleman staring at you from across the table, who you unwillingly have to call ‘dad’.

This is where the Tascam DP-006 Multi-track Recorder comes in, with its compact, ultra lightweight (just 360 grams), and feature-rich design giving you everything you need to excuse yourself from the table and quickly lay down some ideas before they fade. That's all you need - ideas and batteries (four AA batteries last up to 9 hours!).

It really is that simple. Tascam thoroughly evaluated microphones to eventually settle on a pair of two omni-directional condenser microphones modelled on the best selling DR series. These are built-into the Tascam DP-006 Digital Recorder, ensuring there is no need for additional equipment and that recordings are always high-quality.

The Tascam DP-006 is a powerful recording device but this doesn’t mean it’s hard to use, far from it. Tascam have ensured that even beginners to recording will quickly get to grips with the unit by stripping it of superfluous features, that just get in the way, and featuring on core functionality and ease of use. With this in mind the Tascam DP-006 has been crafted with Analog functionality and dedicated control knobs, alongside a useful chromatic tuner and a metronome.

However you use the Tascam DP-006 Digital Recorder you’re covered for connectivity, with the device’s two analogue inputs. This allows direct recording from an external mic, electric/electro-acoustic guitar or a line-level audio device. You can even hook up a tablet device, such as an iPad, with a conversion cable (not included).

Even once you’re done recording the Tascam DP006 Digital Recorder keeps things simple, as files are saved as WAVs to an SD/SDHC card (2GB card included). The device hooks up to your computer via a USB for quick transfer to and from your computer, and for use in a DAW.

The Tascam DP 006 Digital Recorder also gives you a number of editing options, such as Undo/Redo (for quickly fixing and re-recording tracks), Clone track, Clean out, Silence, Cut, and Open. 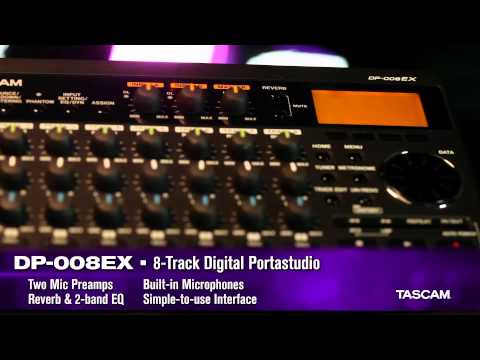